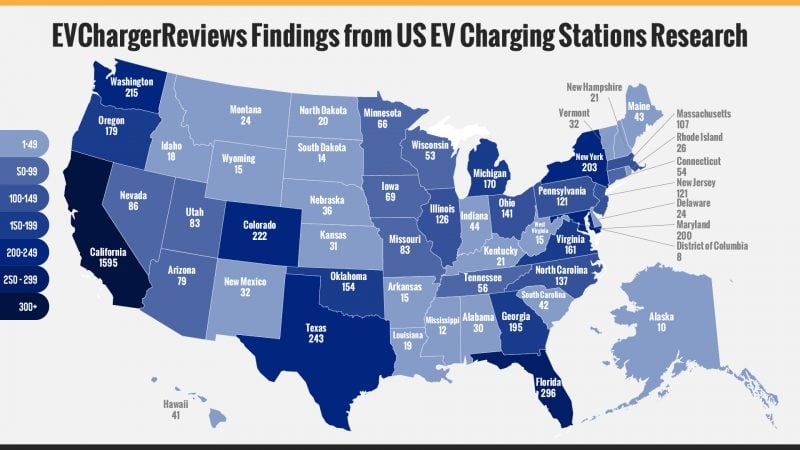 Charging has always been the greatest sticking point for electric vehicles (EVs). It was the primary reason why initial take-up was slow. But with around 6.75 million EVs sold globally in 2021, and 9.5 million units predicted to sell in 2022, the place of the electric vehicle has been truly cemented within the world’s transportation ecosystem. So, where are we now, when it comes to EV charging stations? Has a reasonable EV charging network been established? Or do we need to do more to ensure that the infrastructure is there to support the growing movement towards sustainable transport?

Looking for answers, we extracted charging station data from the API of the Alternative Fuels Data Center (a resource from the U.S. Department of Energy), for the United States and Canada. The data request was made on June 13, 2022, and limited to “DC Fast” chargers (Level 3), that were publicly accessible, and operational. Our research excluded charging stations provided by car dealers from the study, because their lots are often gated and locked after business hours, and consequently of limited use. This is what we found out.

EV charging stations in the US

In the United States, our research uncovered generally disappointing results. California very much leads the charge, if you’ll excuse the pun, hosting an impressive 1,595 fast EV stations. Including the largest EV charging station in the United States – the Tesla Supercharger in Firebaugh, which provides 56 connectors. With each station accommodating varying numbers of connectors, California provides a total of 7,233 individual charging points which works out to be one connector per 5,466 residents. But the figures drop significantly after that, with no other state even close to approaching 1,000, or even 500 charging stations. In fact, California has five times as many charging stations as Florida, which comes in in second place, with 296 stations. Texas (243 stations), Colorado (222 stations), and Washington State (215 stations) complete the top five US states with the best EV infrastructure. But given that none of them has more than 300 charging stations, these figures are not too boasted about. And it only gets worse.

At the bottom end of the scale, Louisiana is the state that appears to be least prepared for the growth in EV popularity, with 50,083 residents for each DC Fast Charging connector. While Alaska is the most geographically sparse state for EV fast-charging connectors, with one per 31,702 square miles of land area. Making long-distance journeys highly impractical for EV drivers.

Other under-prepared states include the District of Columbia, which has eight stations, Alaska (10 stations), Mississippi (12 stations), South Dakota (14 stations), and Arkansas (15 stations).  Although the mean number of connectors per EV charging station in the US sits at 4.08, many of the older stations have no more than one or two connectors. In Alaska, for example, there are only 18 individual EV connectors to serve a state of 733,391 residents. In contrast, the state currently has 377 gas stations, each one possessing multiple (typically between six and twelve) fuel pumps. It doesn’t bode well for the future of sustainability in the region. Interestingly, much of the roll-out of public EV charging stations in the US has been driven by retailers seeking to enhance their customer service offering, rather than gas stations. 50 Whole Foods locations in the US have DC Fast charging stations, providing 164 connectors in total. While 5.25% of the total number of EV charging stations are on Walmart store property, with 13,000 connectors in total at Walmart US stores. In contrast, there are zero EV stations in Walmart stores in Canada.

Surprisingly, despite the country’s reputation for being a leader in sustainability and sustainable development, Canada has been slow to introduce fast EV chargers. In fact, according to Statista, as of 2021, there were only 3,055 fast EV chargers in the whole of Canada. And 15% of them are in Quebec, which is home to 471 stations. Ontario holds 10% of the nation’s total chargers (332 stations), and British Columbia 8% (251 stations). While the three Canadian provinces with the lowest number of EV stations – Prince Edward Island (7 stations), Yukon (12 stations), and Newfoundland and Labrador (15 stations) hold just one percent of chargers between them.

How do the US and Canada compare to the rest of the world?

According to the ACEA 2021 update of the annual ‘Making the Transition to Zero-Emission Mobility’, three European countries – The Netherlands, France, and Germany – account for 70% of all the EV stations across Europe. In the UK, only 7,663 public fast EV chargers were available in 2021 – although this figure is still more than double the number provided in Canada.

Fast EV charging stations were first developed in 2012. That means that we’ve had an entire decade to successfully manage the building of infrastructure to meet demand. But although demand for electric vehicles has grown exponentially in recent years, in most states of the US and Canada, a charging network remains non-existent. While Forbes released research last year, suggesting that EV home chargers were still the preference of most electric vehicle owners, provision must be made for drivers to undertake long-distance journeys, if the move towards a more sustainable transport network is going to become a reality.